The demo version of FLAT 1 is now available for download.

To make it not easy, this demo version contains level 3.
The game has been written in Kunbasic. We hope you like it!

At the moment, Darkstone is developing a new game.
It is in an advanced stage.
Some levels and sound need to be made before it’s finished.
The name of the game is: flat1 . The maze exploring game.

It is a fascinating screen that is not used a lot on MSX. On MSX2 I once made some animations from gif to MSX.

It was a lot of work to set the correct palette for each frame.

and the name of the character is: Petra

Part of the intro image is made. The ‘player’ is done. now we need to draw her to game size.

Darkstone enters the #msxdev compo with Pixiedust. It is an autoscrolling maze game written for MSX2 128K VRAM.

Idar is a region on the island of Daq, somewhere in Earth’s history. When
a lord (or land lord) of Idar knows he’s soon about to pass away, a new
lord will have to be chosen. This is done by means of an old game, to be
played by the lord’s house.
In the shape of a traditional board game, four aspiring land lords strive

for the honorable title of lord. It’s a fierce battle where the dice will point out the winner.

For msxdev10 we created  this game! Download it now here ROM and Manual. Read more on the site of msxdev here.

But now a demo of a earlier DAQ game.

It’s just a demo for the pc but the gfx are made in msx screen 4!

A great co-op between Darkstone and Up-soft.

A puzzle game that will stress you out!

This game is for msx2 and completely made whit the msx it self. 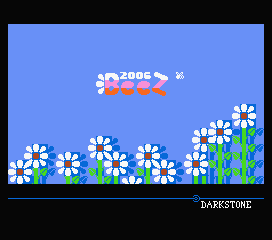 Game created by Darkstone in 2006 for the msxdev06 contest.
It’s a small game made totally in MSX-BASIC!
download